Tonnes of Tins with Spirit FM

One in five of the UK population live below the poverty line, and before the financial crisis in 2008 even the concept of food banks were virtually unknown in the UK. Then in 1997 The Trussell Trust was founded, and in 2004 they established a franchise model for UK food banks.

Research published in 2017 found there were now over 2,000 UK food banks, with a number of food banks in the Chichester District, including the local charity Stonepillow providing vital support for the homeless.

Cathedral Wealth Management have always supported Stonepillow and other local charities in and around the Chichester area, and being an avid listener of the local radio station Spirit FM, recently got involved in their Tonnes of Tins appeal. 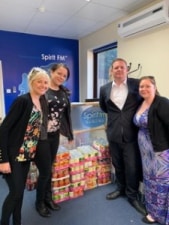 The aim of the Tonnes of Tins appeal is to raise awareness for the food banks across West Sussex and collect as much tinned food as possible. The total raised was 5,500, of which Cathedral Wealth Management donated 250.

All these tins will go to help struggling families relying more and more on food banks in West Sussex, and were donated to Chichester District Foodbank, Bognor Regis Foodbank, Littlehampton District Foodbank and Stonepillow Homeless Charity.

For more information on the services Cathedral Wealth Management in Chichester offer, including pension planning, investment planning, and inheritance tax planning, contact the offices on 01243 813058 for no obligation financial advice.

Please note that clicking a link will open the external website in a new window or tab. Links from this website exist for information only and we accept no responsibility or liability for the information contained on any such sites. The existence of a link to another website does not imply or express endorsement of its provider, product or services by us or St. James’s Place.

PrevPreviousThe South Downs 50k Walk
NextThe Summer Annual Client Meeting, All For A Good Cause, June 2019Next
signup for our newsletter

The Partner Practice is an Appointed Representative of and represents only St. James’s Place Wealth Management plc (which is authorised and regulated by the Financial Conduct Authority) for the purpose of advising solely on the Group’s wealth management products and services, more details of which are set out on the Group’s website www.sjp.co.uk/about-st-james-place/our-business/our-products-and-services. The ‘St. James’s Place Partnership’ and the titles ‘Partner’ and ‘Partner Practice’ are marketing terms used to describe St. James’s Place representatives.

Any cookies that may not be particularly necessary for the website to function and is used specifically to collect user personal data via analytics, ads, other embedded contents are termed as non-necessary cookies. It is mandatory to procure user consent prior to running these cookies on your website.